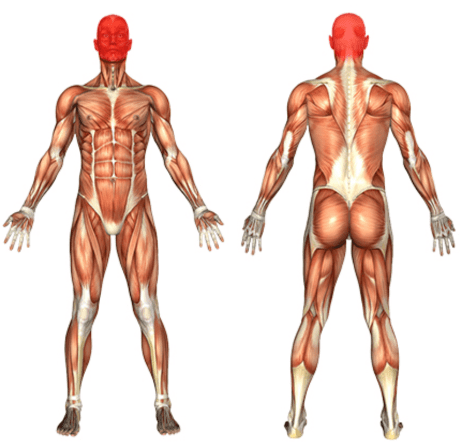 Head pain or cephalgia refers to pain in any part of the head or of the entire head. This differs from a headache which is traditionally accepted as only referring to pain on the upper part of the head including the temples (sides), frontal (front), parietal (top) and occipital (back of the head) regions.

Despite this difference, the terms ‘head pain’ and ‘headache’ are often used synonymously.

Head pain can be divided by pain of the structures :

Extracranial Causes
It is important to first identify the area of the head where the pain is located as this will give an indication of a possible cause. At times, the pain may feel like the entire head is paining, which is often described as head congestion, and this may be an indication of systemic causes. Understanding the characteristics of the different types of headaches may also help in isolating the cause of the pain.

The causes below are not the only causes but are the most common for the specific regions.

Pain on the top of the head may be due to :

Pain at the back of the head may be due to :

Pain on the sides of the head (temples) may be due to :

Pain at the front of the head (forehead and above) may be due to :

Pain around or at the back of the eye, including pain of the eye itself, maybe due to :

Pain at the nose may be due to :

Pain of the upper jaw and below the cheek bones may be due to :

Infections of the skin, connective tissue or individual organs of the head. For example sinusitis, strep throat or a gum abscess. Generalized infections, like influenza, are also known to cause head pain.

This may be due to disorders with the movable body parts in the head and/or neck area. For example – temporomandibular joint dysfunction (jaw), cervical spondylosis (neck).

Compression of nerves of the face and head, diabetic neuropathy or neuritis.This may also include cervicogenic head pain which is a result of pathology of the upper (cervical) spinal column, neck or shoulders. For example – occipital neuralgia (nerve pain) may cause headaches felt on the top, back and sides of the head. Also refer to facial pain spine for information on facial pain as a result of nerve compression.

Benign or malignant tumors of the head and face which may also cause compression of the nerves.

Injury to the head during impact, assault or falls. This may also relate to post-operative pain after surgery to the head. This may result in soft tissue inflammation, hematomas, inflammation of individual organs or bone fractures.

Overuse may result in inflammation with accompanying pain. For example – clenching of the teeth may strain the masseter and/or temporalis muscle often causing jaw, cheek and forehead pain.

Systemic and Other Causes of Head Pain

Head pain is among the common side effects associated with the use of pharmaceutical drugs. It is also a common withdrawal symptom.

This will include benign and malignant tumors of the following intracranial structures :

Ask a Doctor Online Now!
An infection of the intracranial may be primary or secondary due to the spread of the infection from other sites.

Bleeding within the brain tissue itself or around the brain thereby causing compression.

Swelling within the brain tissue or an increase in the fluid around the brain may be due to :

Fluctuations in the blood supply to the brain, resulting in increased blood flow to some areas and restricted flow to other regions.

The cranial nerves originate from the brain and compression or irritation of these nerves may cause head pain.

Hormones and neurotransmitters may have a multitude of effects that could result in head pain but it is more likely that these chemical alter the blood flow to the brain (vascular).